I’ve spent a number of years telling my children how they are related to the royal families of Europe.  I’ve rattled off famous names and talked about how far back in time each line goes.  I’ve told them that genetically there is a little bit of all these kings and queens in them.  Essentially, I got – “That’s nice Dad.”

So, in order to get my children more interested in genealogy I needed to get more creative, more visual.  OK, I wouldn’t say that I got as crazy as Richard Dreyfuss sculpting Devils Tower out of mashed potato or Kevin Costner building a baseball diamond in a corn field.  At one point, I think I heard one of the kids say – “Mom, what’s Dad doing?”

I started printing and cutting and pasting.  I began on a small corkboard, then moved up to a larger corkboard and realized that it still wasn’t enough space.  Then I laid claim to an entire wall in the cellar and the Royal Wall Mosaic was born. 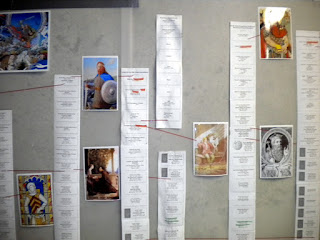 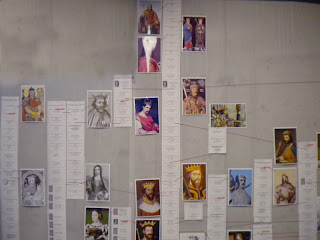 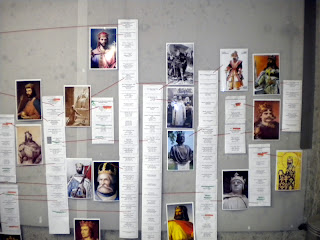 I printed every generation in a direct line so that the connections were clear.  I scoured the internet for images of as many royal ancestors as possible.  I displayed the royals across the wall from Brian Boru, King of Ireland, at the far left (representing the West) to Alexios Komnenos, Byzantine Emperor, at the far right.  In between were the kings and queens of Scotland, England, France, Spain, Sweden, Germany, Poland, Russia and Hungary.  I tied it all together with bright red adhesive lines connecting all the families.

Now this had the intended effect.  For days, my kids would go to the cellar and look at the wall to check out the Who’s Who.  I would point at the middle and tell them, “See that guy there.  He sentenced Joan of Arc to death.” or “You know the story of Robin Hood and Prince John?  Well guess what, you are descended from John.”

My children even started to show their friends.  One friend was quoted, “You have the coolest parents.”

The point of my story is that your genealogy shouldn’t hide in a book or in a computer program.  Your genealogy wants to live large.  Print your family history as large as you can and paper a wall, sew it into a quilt or turn your ancestors into ornaments and hang them on a real tree.  All your hard work won’t matter if your history is covered with dust.

Start working on your Mosaic.  If you build it, you never know who might come.