We’re all cousins! Genetic genealogy can tell us just how closely we are related.

Each of us already has a key to a library of knowledge about our ancestors, it’s in our DNA. Until recently, genealogists have relied on oral tradition and historical records. With DNA for genealogy, we now have a valuable new type of evidence. 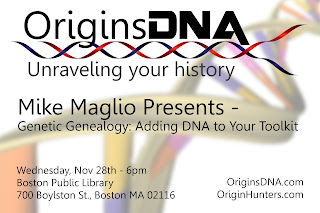 Join us on November 28th at 6pm at the Boston Public Library as the Local & Family History Lecture Series hosts and I present Genetic Genealogy: Adding DNA to Your Toolkit.  We will look at the variety of testing options and the potential mysteries that they will unlock.  Learn about your deep ancestry, confirm your existing family history or break through brick walls in your genealogy research.

See how easy it is to add DNA to your genealogy toolkit.


As we approach Thanksgiving, it’s a great time to write about our Mayflower ancestors.  So far, I have found two on my wife's side, Stephen Hopkins and Stephen Hopkins.  Ok, that’s really just one, but I have two lines that trace back to him.   This isn’t unusual, estimates put the count of Stephen Hopkins’ descendants at about 2 million Americans.

What can Stephen Hopkins’ DNA tell us about his origins and his ancestors?  First, I should say that no one has a sample of Stephen’s DNA.  What we know about Stephen comes from tests completed by his male-line descendants with corroborating genealogical paper trails.  The Hopkins families are members of y-DNA haplogroup R1b, the largest genetic population in Europe.  R1b is often associated with the Celtic and Gallic tribes.  Hopkins’ DNA may be able to shed additional light on his birthplace, extend his genealogy further by tapping into an older family line or tell us about his deep ancestral origins.

One of the first things I like to do is compare the haplotype, (the numeric markers from a y-DNA test) against a public database like ySearch.org.  The goal is to find other parallel lines of Hopkins with ancestry that predates Stephen.  This would allow us to work forward in time, connecting to Stephen and his father John, breaking through the current brick wall.  Unfortunately, no such records exist.

What we do get from ySearch is list of genetic cousins and their ancestral locations.  Plotting these locations generates a distribution from Kent to Cornwall across southern England.  The highest concentration of cousins is in the historic Anglo-Saxon kingdom of Wessex.  The current research on Stephen Hopkins has him baptized in Hampshire, the heart of Wessex.

What kind of R1b was Hopkins?  Was he a Celt, a Gaul, an Anglo-Saxon or something completely different?  One way to get close to the answer is to look at his genetic cousins again.  Since R1b is such a large group, it is important to focus on both the haplotype and SNP that defines his R1b subgroup.  The SNP that best defines Stephen is S493, which on the 2012 haplogroup tree is R1b1a2a1a1a2.  With the explosion of new SNPs identification and the rapidly expanding and changing subgroup nomenclature, researchers are advocating the use of the SNP rather than subgroup as a naming convention.  Let’s call Stephen Hopkins R-S493.

When I take all these genetic cousins and run them through TribeMapper®, a pattern forms.  Ancestors start to pile up on either side of the English Channel and an approximate date of migration emerges.  Here’s where we pull out our history books.  If the date were about 2,500 years ago, I would say this was a Celtic migration.  If the date were 2,000 years ago, I might say these were Gaels fleeing the Romans.   The calculations come out to be about 1,500 years ago, putting this migration in line with the Anglo-Saxon invasion of Britain.

Why stop there?  What flavor of Anglo-Saxon are we talking about?  Angle, Saxon, Jute?  The great thing about tribe mapping is that we can continuously turn back the clock and get a new picture.  If we find a Danish connection, then we might say Jutes or an association to the Angeln region of Germany, we could say Angles.  We have to be careful as those names and locations were just a snapshot in time when ancient historians catalogued Germanic tribes.  Those tribes, like all tribes, were just passing through.

Stephen Hopkins’ DNA points to a genetic cluster in modern day Lithuania and Latvia.   This data most closely correlates to the Saxons and their origins on the Baltic coast.  Continuing this process gives us the following migration map. 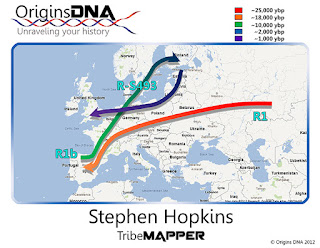 The R-S493 data takes us through Finland, Sweden and back to the mainland Europe to the Iberian Peninsula.  This puts the origin of R-S493 in Iberia about 4,000 years ago ± 500 years.

We can’t be certain that Stephen Hopkins has Saxon DNA.  We can’t even say that all Saxons were haplogroup R1b.  It’s unlikely that they were a single homogenous ethnic group, but the core of the tribe would have had strong familial and genetic ties.  Were Hopkins’ ancestors at the core of this tribe or part of the fringe, picked up along the way?  A broader study of DNA associated with the same places and times would be required to answer that question.

If we look at the surname Hopkins, its origins are from Hobbes-kin and even further back to the Germanic name Hrodberht.  Stephen Hopkins and his closest genetic cousins are found in the historic Kingdom of Wessex (West Saxons).  Time-wise, there is a correlation to the Anglo-Saxon invasion of Britain.  We can even make a connection to the proto-Saxons along the Baltic coast.  I’m going out on a limb and calling Hopkins a Saxon.

That Saxon bloodline remained adventurous and served Stephen well as he voyaged to Bermuda, Jamestown and Plymouth colony.

It’s never obvious where DNA will lead.  Each tribe mapping is an adventure in itself.

Your mother’s ancestry can be extremely challenging. Most of us live in a patrilineal society. The wife and the children take the surname of the husband. History shows us that recording the maiden name of the wife was often an afterthought. We have all tried traditional genealogy for our mother’s line. Some of us can go back a couple of generations and have hit brick walls. Some of us have researched a dozen generations. Mitochondrial DNA testing can aid a genealogist in discovering those lost surnames and validating your research.

Two months ago, I wrote about y-DNA and its use in tracing your paternal line. Mitochondrial DNA testing looks at your maternal line. There are many similarities and just as many differences between the two tests.


...continued at The In-Depth Genealogist with a free membership.

*The Deep Into DNA article series is published each month in The In-Depth Genealogist Newsletter and will demystify genetic genealogy and make sense out of DNA testing terminology. Each month we will talk about the types of tests available from major labs and show relevant examples on how to use DNA in your genealogy research.