No Father for Rita


This sounds like a title for an afterschool TV special.  Rita was my grandmother and she was illegitimate.  As in many cases, her McCarthy grandparents adopted her and raised her as their daughter.  I can imagine that her life was in some ways like those old afterschool specials.

By the time Rita was 5, both of her ‘parents’ were dead and she was now being raised by her ‘brothers’ and ‘sisters’.  I’m relying on anecdotal evidence from my cousins that ‘sister’Helen is really Rita’s mother.   The task of raising Rita fell to Helen’s sister Mary.  Everyone else in the family was out working jobs like – electrician, carpenter, machinist or telephone operator.  The bond between Rita and Mary was tight and lasted until their deaths.  Perhaps I just didn’t see other tight family bonds because the rest of her side of the family passed away before I was born. 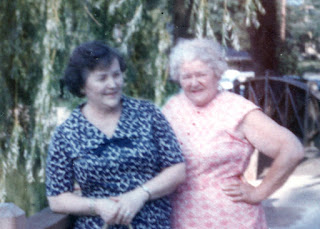 One by one, the McCarthy siblings married and moved away.  By 1930, Rita was living with her mother, Helen, and her new family.  Helen’s husband John listed Rita as a boarder on the census.  As a minimum, Rita should have been listed as a sister-in-law.  My interpretation of this is that John knew exactly who and what Rita was and wanted to distance himself from the fact.  He had no intention of being a father figure.

Rita was shuffled around to two other families before she married my grandfather in 1938.  Yet, through all that turmoil in her life, she turned out to be the sweetest and most caring of women.

Whether you are a genealogist or not, you have to wonder who Rita’s real father was.  I do.

Autosomal testing is one way of determining who he was.  Now I could rely on matching someone randomly in the databases or I could shift the odds in my favor.  I started researching every male in a two-block radius from where Helen was living in 1913.  The research turned up a number of good suspects.  Autosomal testing is not inexpensive.  I needed narrow my field by using any additional evidence I could find no matter how circumstantial.

One of the single men (not that it had to be an unmarried individual) that I found was just a bit older than Helen was.  Based on my evidence, they probably grew up together and had known each other since they were kids.  When Ed did get married, he named his daughter Rita.  As far as I can tell, Rita was not a common name at the time.  Other folks who were researching Ed posted his photo in their tree.  I thought that there was a bit a family resemblance there.

I contacted Ed’s descendants and explained what I was trying to do.  They agreed to the testing and then the waiting began.  I expected at least a two-month wait for the results.

When the results came in, first mine then theirs, I was disappointed to see that against the database I only had potential fourth and fifth cousin matches.  Considering that most folks that are getting an autosomal test are doing it because they are missing big chunks of their genealogy makes finding a common ancestor with a fifth cousin a daunting task.

Also disappointing was the lack of a match with Ed’s family.  The matching is all done automatically and the results will only show for the close matches.  I even contacted the testing company and asked them to intentionally run a comparison and send me the results.  They did and still no go.  Not even close.

Still no father for Rita.

All is not lost.   I have my autosomal results and I have sent out my introductions to all my fourth and fifth cousins looking for a very narrow set of conditions.  They had to have had family at one time in Dorchester.

For more on this family see my posts here & here.