Those Places Thursday: They Came From Neponset

For those of you who may not be familiar with Neponset, it is a neighborhood in the southeast portion of Dorchester bounded by Tenean Beach, Port Norfolk and the Neponset River.  It is in Dorchester that my Italian grandfather met my Irish grandmother and the rest is history. 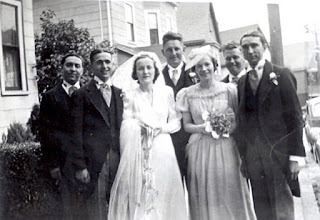 Let's go back two generations to my gg-grandfather Florence McCarthy and yes, Florence was a fairly common man's name back then. In fact the last Irish Prince was a Florence McCarthy (1560–1640). My Florence emigrated from County Cork in 1887 with his wife Catherine Sweeney. By the 1900 Census Florence owned his own home. That's not bad for someone just off the boat 13 years earlier.

On that census Florence is listed as an RR Laborer. My guess, considering that he lived 50 feet from the Old Colony railroad line, is that RR stood for railroad. Now I have the tune for "I've been working on the railroad" stuck in my head. When I think of a "laborer" at the turn of that century I think of someone digging ditches or shoveling coal and "no Irish need apply". I can't imagine that it would be easy to buy a house on a laborer's wage.

I poured through the records to see if I could get a better understanding of Florence the laborer. On the 1910 Census he is also listed as a laborer, this time for the city. He died in 1915 at the age of 59, so, I won't find him in any other census. City Directories are a great resource. I've been able to figure out family units, find occupations, track movement year after year and sometimes get a death date. I started working back through time. In the 1899 City Directory he is listed as a "nailer". This information combined with the railroad laborer job conjures up images of sledgehammers and railroad spikes. No wonder Florence died young, his heart gave out just like John Henry. Exaggeration aside, Florence did die of acute endocarditis, an inflammation of the heart.

I found a great series of maps at the Dorchester Antheneum. On the 1894 map for Neponset, Florence is shown owning land on Norwood St. By 1899 there is a two family house built on the property. I have one answer - Florence was making an extra income being a landlord.

While on the Dorchester Antheneum site I stumbled upon a record for the S. S. Putnam Nail Company. 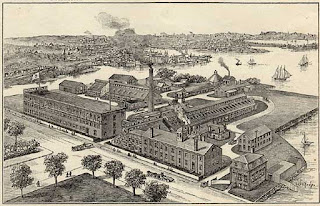 The nail factory at Neponset manufactured horseshoe nails.  In the 1890's it produced 10 tons of nails per day and employed 400 workers.  This gives a whole new definition to the occupation of "nailer".  Work at the nail factory must have been good.  I was able to trace Florence and some his coworkers through the city directories as they moved from homes a few blocks from the factory to better neighborhoods and eventually their own homes.

Somewhere between 1904 and 1910 the Putnam Nail Factory had gone out of business.  Could it have been that the introduction of the automobile in 1908 caused a decline in the need for horseshoe nails?  (Henry Ford installed his first assembly line on this day {Dec 1st} in 1913)

In the 28 years that Florence McCarthy lived in the United States he became a citizen, raised 8 children, and built a great foundation for his family.
at December 01, 2011