They Came From Neponset: Oh, Those Irish


Would you believe that it was only two years ago that I learned who my Irish great-grandparents were.  An Italian cousin added their names to the family tree he was working on.  No one ever talked about our Irish side.  No one had ever mentioned Florence McCarthy (great grandpa) and Catherine Sweeney McCarthy (great grandma) before.

My grandmother, Rita McCarthy, was illegitimate.  It happens and it’s nothing that I’m ashamed of nearly 100 years later.  I’m sure it is part of why I knew nothing of my Irish connections.

When I was in High School, my parents told me that I was related to a girl named Gillis.  They mentioned that it was through grandma’s side of the family but didn’t supply any details.  No surprises there.  Deb Gillis was in a number of my classes and I reintroduced myself as her cousin.  We jokingly called each other ‘cuz’ after that.

30 years later, I arranged to meet with Deb’s mother, Jane McCarthy Gillis.  Jane is a wonderful woman and was able to tell much about her slice of the McCarthy family and contact info for other cousins.  What I remember most about my conversation with Jane was her question to me.  “What do you really want to know?”  Jane wanted to tell me about my grandmother but needed to know if I wanted to hear.  I was all ears.  She talked about what she had heard, that Rita was most likely the daughter of Helen (Helen was one of two daughters of Florence and Catherine).  That would make Florence and Catherine my gg-grandparents instead and Helen my great-grandmother.

I used the information from Jane to find an obituary for Jean (Murphy) Martin, wife of Helen’s son John Martin.  A few years after my grandmother was born Helen married John Martin and had two children.  Her son John married Jean Murphy and they had 10 children.  The obituary had the names of the children and their towns.  I did a phonebook search and called around until I hit the jackpot.  The lucky winner was Beth (Martin) McDaid.

I went to meet her and her family and was happily surprised to meet three of her siblings.  I brought photos and stories to share and they gave me a terrific photo of Helen. 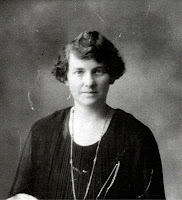 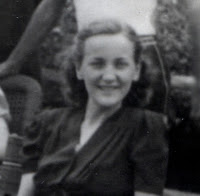 In my opinion, there is a strong resemblance between Helen and Rita, which gives me confidence that they are mother and daughter.

As I researched, I found that it was Catherine Sweeney McCarthy’s (gg-grandma now) side of the family that played a central role in the family connections.   Catherine ‘Kate’ Sweeney, daughter of Daniel and Ellen (Buckley) Sweeney, was as far as I know one of seven children.  Kate and three of her siblings emigrated from Ireland and lived in Neponset.  Julia Sweeney married John Galvin and lived in the same two-family with Florence and Catherine.  Bridget Sweeney married Timothy Neville and their grandchildren are still in touch with my uncle.  Patrick Sweeney married Florence Murray and their daughter Doris was Rita’s maid of honor at my grandparent’s wedding.

Maybe someday I will learn Rita’s father’s surname.  For now, the name McCarthy is synonymous with my Irish heritage.  I needed to know more about Florence McCarthy.

Florence’s death certificate lists his father as Timothy McCarthy with no mother info.   Through a series of records including the census, street directories and birth records, I found a Timothy McCarthy.  Sometimes Timothy lived with his daughter Ellen (McCarthy) Buckley and for a while, Ellen lived next door to gg-grandpa Florence.  It appeared to be more than a coincidence.  All I had to do was prove that Ellen and Florence were siblings and that particular Timothy was ggg-grandpa.  That Timothy did have a son Timothy (Thade) whose birthdate was close to Florence’s.  No matter how hard I tried, I couldn’t find a record that listed my Florence as Timothy Florence or Florence Timothy.

It didn’t help that for every record Florence listed a different birth year.  I finally tracked down Florence’s Naturalization records and found his real birthdate – April 8, 1856.  He has the same birthdate as my daughter.  Who has goosebumps now?  Armed with real birth info I was able to find Florence’s birth record in Kilmichael Parish, Co Cork, Ireland.  His parents are Timothy and Ellen ‘Nelly’ (Lynch) McCarthy.  Here is where the lightbulb finally goes on.  The Timothy McCarthy that I have been chasing around Neponset also has Timothy and Ellen (Lynch) McCarthy listed as parents on his death cert.  So Timothy and Florence aren’t father and son, they are brothers.  All the other facts that I have collected now fit nicely into place.

What I have so far is that Timothy and Florence are two of eight children all born in Shrone, which conveniently I can’t find on a map anywhere in Kilmichael Parish.  The other siblings are Margaret, Joanna, Ellen, Julia, John and Con.  I’m fairly certain that sister Ellen married Patrick Neville and that their son Timothy married Bridget Sweeney, tying everything together again.

My two big Irish research goals are to find Rita’s father and to visit the magical little village of Shrone sometime next year.