I’ve been creative with the titles of my articles in the past. It is the first thing people see and it better be eye catching. It’s been said that I'm ‘intentionally provocative’. I enjoy writing about topics that make people think. I draw the line at faulty logic. Many times, I'll draw conclusions from circumstantial evidence, but I always strive for a logical argument.

Thomas Jefferson was part of the rare y-DNA haplogroup T (formerly K2) and much has been written about his genetics. Not everything written has been logical in its assumptions. Sometimes the story lines misinterpret the underlying science.

“If Jefferson was Phoenician, then Charlemagne was also.”

“Thomas Jefferson could have recent origins in the Middle East.”

In these situations the writers took a single data point and ran with it out of context.

When we look at Jefferson’s DNA and compare it to available records, we only get a handful of matches that don’t tell a complete story. Let’s look at the first headline – was Jefferson Jewish? He didn’t practice Judaism and he wasn’t raised Jewish. He does have one genetic cousin who is a Moroccan Jew, but you have to go back about 2,000 years to find a common ancestor. While haplogroup T does have origins in the Middle-East, I wouldn’t say that it is definitely a Jewish haplogroup. If Jefferson were J1b2, there would be a stronger case tying him to the kohanim Jewish paternal lines. Jefferson also has a Belgian genetic cousin. Perhaps the headline should have been – Was Thomas Jefferson the first Belgian President? Not that exciting. Probably wouldn’t have sold very well.

Thomas Jefferson was a Phoenician! There are many articles attributing this statement to Spencer Wells as part of his In Search of Adam program in 2005. I can’t find one quote that actual has Wells saying this. In fact in 2008 Wells argued that the Phoenicians were haplogroup J2. Jefferson’s haplogroup T is found in the same places and at the same times as the Phoenician Mediterranean colonies. This may indicate that Jefferson’s ancestors travelled with the Phoenicians as a peer or as a slave. I don’t think that ethnicity by association works.

If Jefferson was a Phoenician, then so was Charlemagne. This is just plain and simple poor logic and a misunderstanding of genetics. As I mentioned, it doesn’t appear that haplogroup T is Phoenician. While Jefferson may be a descendant of Charlemagne, he is not a direct male descendant. You really need to be a direct male descendant to prove that an ancestor has the same y-DNA. One sample would never be enough to prove Charlemagne’s DNA. Multiple descendant samples and very strong genealogies are required to come close to determining an ancestor’s DNA. You never know where a non-paternal event may pop up.

Could Jefferson have recent origins in the Middle East? This writer never actually defines recent. We are left to wonder if the Jeffersons lied on their Naturalization applications. Based on ‘time to most recent common ancestor’ calculations, I’d put Jefferson’s ancestors in the Middle East about 3,000 years ago. I guess that’s fairly recent compared to the age of the universe.

Jefferson’s DNA traced to Egypt! One record match does not make an origin. That one Egyptian genetic cousin actually clusters better with other Moroccan records. This could indicate a back migration from Morocco to Egypt for that one person. A rule of thumb when determining origins is to find clusters of records. Jefferson does have a cluster on either side of the Strait of Gibraltar. This provides a strong argument that Jefferson’s ancestors came through that region and perhaps loitered there for a while. That doesn’t make it his origin.

How should we define Jefferson’s origins? It is important to define origins with context. Where in Britain did the Jeffersons come from? One biographer puts Jefferson’s family origins in Wales. Jefferson’s closest British genetic cousin comes from Yorkshire and the Jefferson surname has the highest distribution in Yorkshire. We are still talking about a single point of reference, so I won’t fall into the same trap and pronounce Thomas Jefferson a Yorkie. I can say that it appears that the Jeffersons were British and that the family had been in Britain for at least a 1,000 years. There’s just not enough data to be more certain.

Jefferson’s tribal DNA does leave a sparse trail of breadcrumbs across Europe in the 1,500 to 2,000 years ago range. There are genetic matches that become increasingly more distant in Belgium, France and Spain. We could connect-the-dots and we probably wouldn’t be far off the migration path. For Jefferson’s European origins, we might say his ancestors were Iberian. If we go back another 500 years, the picture changes to a culture that traveled the Mediterranean. The genetic breadcrumbs are in Morocco, Sicily, Cyprus, Egypt and Turkey. We could talk about Jefferson’s haplogroup T origins. A cluster of data suggests a southern Arabian Peninsula origin about 8,000 years ago. 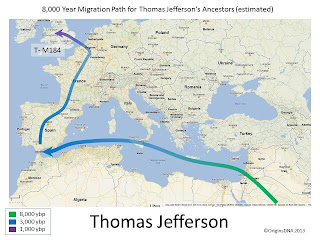 If we continue backward in time, Jefferson’s ancestors came from East Africa just like everyone else on the planet. Which ‘origin’ you choose for Jefferson is completely up to your specific agenda. I use genetic genealogy to get a better understanding of the world that we live in and the things we have in common as one species. We may learn through DNA that our ancestors sacked Rome or pillaged the coast of England. That’s history, that’s fascinating, but that’s not who we are today. Unless you personally choose to embrace that history. Jefferson’s distant ancestors may have been Jewish, Phoenician or Egyptian, but that’s not who he was.

We shouldn’t persecute for the sins of our ancestors or sit on the laurels of their accomplishments. We need to keep moving forward in a positive direction.