The DNA of John Cutter West: Connected and Disconnected


Bill West, author of the blog series ‘West in New England’, has been writing about his ggg-grandfather, John Cutter West, for over five years.  Bill calls him ‘The Elusive John C.’ 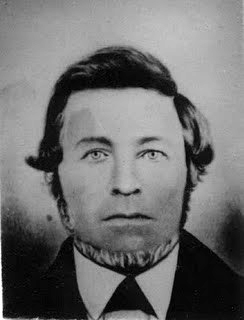 Some genealogies connect John Cutter West as the son of Paul West and Hannah Crowell of Liverpool, Nova Scotia.  It has also been suggested that he could be the grandson of Josiah West and Elizabeth Griffith of Plymouth, MA.  Both Paul and Josiah are descended from Francis West of Salisbury, England who immigrated to Duxbury, MA.

Bill West completed a 37-marker y-DNA test and his results came back as haplogroup J2.  Multiple descendants of Francis West have also been tested.  Their results indicate that Francis West was a member of haplogroup R1b.  Bill is related to Francis West in the same way that J2 is related to R1b, but you have to go back 40,000 years ago to find that family connection rather than 400 years.  DNA results can be a double-edged sword.  They can prove your connection or just as easily disprove your assumptions.

One of the most exciting events in DNA testing is when you receive your results showing multiple matches with your surname.  If you have already researched a dozen generations, the test is confirmation.  If you are just getting started, the test connects you with cousins.  Or, if you were adopted, getting matches to multiple records with a surname you weren’t expecting will lead you on a path of discovery.  In a survey of major DNA databases, Bill’s genetic record didn’t have any close matches.  The wonderful part of y-DNA testing is the ability to dig deeper.

Here is what we do know about Bill’s DNA.  Haplogroup J2 has origins in Mesopotamia about 18,500 years ago and it is associated with speakers of the Semitic languages.  The J2 haplogroup is widespread around the Mediterranean with connections to both Arabs and Jews.  Bill’s haplotype, the 37-markers from his test, are a genetic fingerprint that can help us find his tribe.

I've developed a tool, TribeMapper®, which allows me to take a haplotype record and map ancestors across time and place.  One of the first clues we find is that Bill’s haplogroup is more uniquely related to subgroup J2b2.  Only a test looking for SNP M241 can prove J2b2 for certain.  My next step is to map the DNA to determine which J2b2 ethnicity Bill belongs.

As I look at slices of time, 4,500 years ago Bill’s ancestors were in places like Turkey, Armenia, Syria and Saudi Arabia.  If I look at a branch of Bill’s tribe at about 3,000 years ago, I see a distinct correlation with locations like Cyprus, the coasts of Italy and Spain and the islands of the Azores.  These places match up with the colonies of the Phoenicians.  Phoenicia had origins in what is modern day Lebanon.  They were known for their extensive maritime trading culture. Phoenicians were not only sea travelling merchants with colonies around the Mediterranean, they had trade routes across Europe as well.  Bill’s closest DNA matches were part of a Phoenician branch that headed into central Europe. 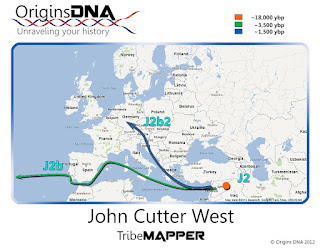 Looking at a period from 1,300 (Bill’s closest match) to 2,000 years ago, we see a pattern of migration into what is modern day Germany and more specifically those genetic connections appear in cities in the Hessen region.  Research into John Cutter West gives the appearance that he has English origins.  The DNA trail ends in southwest Germany.  We are still left with the fact that there are not enough DNA records to fill the gap between now and 1,300 years ago.  It is possible that Bill’s ancestors migrated further, from Germany to England.

Now it’s time to move from facts to theory.  The closest DNA matches indicate a connection to the Hessen region of Germany.  An avenue worth investigating is whether one of those ancestors was a Hessian soldier that stayed in America after the Revolution.  Perhaps the reason there are no records of John Cutter West before his 1827 marriage record is that he was born under a different name, a more German sounding name.

Sometimes DNA can help us make all the connections.  In the case of Bill West, he is still disconnected over the last 1,000 years.  That’s a big space of time with plenty of questions.  More folks are being tested every day and the DNA databases are growing.  Today the data shows that Bill has deep Phoenician roots and that those ancestors settled in the German region of Hessen.  Time and more data will help revise and refine this picture of Bill’s tribe.