One of my favorite aspects of y-DNA is that it’s used to prove or disprove that two men with the same last name are closely related. Two family lines with a similar surname can figure out if they have a common ancestor. The DNA matches or it doesn’t. What do you do if the common ancestor you are looking for doesn’t have a surname? If you are researching the British Isles, the surname you are looking for is probably less than 1,000 years old.

In 1066, when King Edward ‘the confessor’ of England died, William was a potential heir to the English crown. When he didn’t get the nod, he took the crown by force by defeating and killing King Harold at the Battle of Hastings.

Finding the DNA of William the Conqueror is not that easy. He has no documented living male-line descendants. King Henry I was his last legitimate offspring. If you look in the phone book, you won’t find too many names listed under Conqueror, William T. That makes asking for a DNA sample problematic.

We have to look at the entire line of Dukes from the House of Normandy to identify the surnames that they would eventually adopt. The line from Rollo to William looks like this – Rollo (846-931) > William I (900-942) > Richard I (933-996) > Richard II (978-1026) > Robert I (1000-1035) > William II (1028-1087). To start, there is some evidence, true or not, that the surnames Clifford, Devereaux and St. Clair have a direct connection back to Richard I and Richard II. It’s not my goal to prove anyone’s genealogy. Many medieval genealogies are pure fiction, geneamyth. Although, with ever story there may be a piece of the truth. Some of William’s companions at the Battle of Hastings were his cousins and it would have made sense for him to surround himself with kin. I collected those names and others that had a tenuous connection.

DNA records for these surnames were collected from publically available sources and sorted into haplogroups. Remember, everyone is related. It’s just a question of how far back in time they share a common ancestor. Members of haplogroups I and J may share an ancestor about 30,000 years ago, but my goal is to find as many surnames that have a common ancestor about 1,000 years ago. So, DNA comparison was limited to within haplogroups. Immediately, groups E1b, G2a, I2, J and R1a were eliminated for having no cross surname relationships.

The first likely candidate was haplogroup I1. I1 would make sense. It is a typical Scandinavian group and Rollo is supposed to be either Norwegian or Danish. There was some good cross surname relationships among 8 of the 27 surnames. More analysis showed that they didn’t form a tight clan and that their common ancestor would have been over 1,250 years ago. That predates Rollo. This doesn’t completely rule out haplogroup I1, but my expectation was that there would be a higher number of surnames and a common ancestor between Rollo and William.

The next candidate was group R1b, the most populous haplogroup in Europe and having a potential Scandinavian or continental Europe origin. This group clustered well across 25 of the 27 surnames and revealed a genetically related clan. To make sure that this wasn’t a false positive or something symptomatic about the large R1b population, I took a random sample of British Isles R1b y-DNA and ran the same comparison. The random sample did not group well and actually formed multiple clusters. 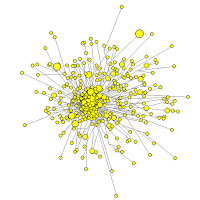 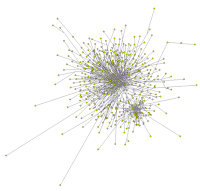 This looks very positive for the R1b group. Twenty-one of the surnames are tightly related enough that their common ancestor lived 1,080 years ago (933 AD), coincidentally the birth year of Richard I. All common ancestor calculations come with a margin of error. I’d say this estimate is plus or minus a generation. Clifford, Devereaux and St. Clair, with their genealogical connection remain in this group as well as Beaumont, Giffard, Montgomery, Mortimer, Osbern and Warren.

The odd thing about this second group of names is that they all, genealogically, connect back to Gunnora, wife/concubine of Richard I. Beaumont and Giffard are descendants of Duvelina, a sister of Gunnora. Osbern is a descendant of Herfast, a brother of Gunnora. None of this common y-DNA came from Gunnora or her sister; being female, they don’t have y-DNA to pass down. We have to look for a common male donor. My theory is that the practice of droit du seigneur – ‘right of the lord’ or primae noctis – ‘right of the first night’ was being used by Richard to increase his genetic success.

Do you have a connection to William the Conqueror? There is an estimate that 25% of the population of England is related to Bill the Conq. From a y-DNA perspective, this percentage would be lower. If you have one of these surnames; Bartelott, Beaumont, Bruce, Clifford, Corbett, D’Arcy, Devereaux, Giffard, Molyneaux, Montgomery, Mortimer, Norton, Osbern, Pearsall, Ramsey, Spencer, St. Clair, Stewart, Talbott, Umfreville (Humphrey) or Warren and match the 37-marker William the Conqueror Modal Haplotype (WCMH), you may be related.

You might match the WCMH within a few steps and not have one of those surnames. The wealthy practiced polygyny. They had as many mistresses as they could afford. The illegitimate male offspring would have generated countless undocumented surnames and carry these same y-DNA markers.

I can’t say that this is exactly William the Conqueror’s y-DNA markers. These values are a mode, the numbers that appear most frequently in the related R1b sample of 152 records. The results that I have found are based on my analysis of about 3,800 y-DNA samples and form a good correlation. New data in the future may change the results.

The techniques that I have used are similar to the ones used to identify Carthaigh (McCarthy King of Desmond), Niall of the Nine Hostages and Genghis Khan. I predict that as the DNA databases grow, more discoveries like this will be found. My next projects are to determine Rollo’s origin (see Exploring Rollo...) and Charlemagne’s haplotype.