My genealogy has one Mayflower passenger, Stephen Hopkins.  Seven other passengers are cousins in one manner or another, Doty, Howland, More, Mullins, Standish, Warren and Winslow.  Twenty-four of the Mayflower families have living descendants.  I have collected the y-DNA records for fifteen of them. (For more on this process watch this short video) It was no surprise to find eight R1b Celts and four I1 Scandinavians among them.  But, the three I2a Balkans intrigued me.

The one name that stood out as I2a was Myles Standish.  Every first grader knows that name.  My first thought was that Myles was descended from a member of the Roman Legions.  Perhaps he was a Scythian or Sarmatian.  I needed to identify the Standish family tribe and when they arrived in England.   If I was lucky, I’d be able to bracket the immigration of his ancestor to the 1st or 2nd century, the height of the Roman conquest.

As the DNA records started to compile using TribeMapper® analysis, an initial pattern developed showing historic habitation on either side of Hadrian’s Wall.  This was the beginning of a great migration story and potentially the end to the dispute of Myles Standish’s origins.  Researchers have placed Standish’s birthplace as either Lancashire or the Isle of Man.  Based on the data, Lancashire emerges as the most likely location.  There was no genetic indication that the Isle of Man was a possibility.

If Standish’s ancestors had been conscripted into the Roman Legion, then I would expect their migration pattern to appear scattered like a diaspora.  Fathers and brothers and their descendants would be spread across the Roman empire.  There would be no focus for the data points representing the period 2,000 years ago.

The actual data points told a different story.  They remained focused.  At the end of the last ice age, about 10,000 years ago, Myles Standish’s ancestors were living in the Balkans.  As the ice receded, they journeyed up the Danube River, a major migration highway, until they reached the upper Rhine.  The upper Rhine was a Neolithic way station for many tribes coming up the Danube or out of Iberia.  The area served as a stopover before continuing over the Alps or down the Rhine.  The Standish tribe chose to follow the Rhine down to the North Sea. 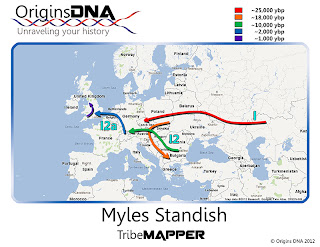 Between 2,000 and 3,000 years ago, Standish’s ancestors crossed into England and made their way up the Thames to its source.  My theory is that they were pushed ever westward by successive waves of immigrants.  They found Wales to be well populated already and ventured north to where we find the most recent genetic evidence, in Lancashire.

My initial theory that Standish’s ancestor was brought to England as part of the Roman Legion, to reinforce the troops at Hadrian’s Wall, was wrong.  It is always good to have a theory to work toward, but don’t let preconceived ideas get in the way of new evidence.  Now that we know that Standish’s origins are pre-Roman we can consider that his family is one of the native tribes of Britain.  The most likely Lancashire tribe would be the Setantii, which is a sub-tribe of the Brigantes.

Each one of our ancestors has a unique migration story to tell.  Their travels overlap with events that we have read about in history books. 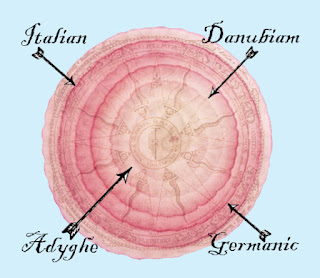 DNA at the Genealogy Field Day

The Massachusetts Society of Genealogists presents -

(free & open to the public - bring a friend)

Join Jeff Carpenter and Mike Maglio at the DNA table to talk about all your genetic genealogy questions.


When we use DNA to research our family history, we have the potential to uncover quite a bit of information.  We could find living cousins, lost connections and deep ancestral origins.  There is also geographic information associated with your DNA.  When you start comparing your DNA to your Clan and your Tribe, you can map your recent old world origins and your migrations.

You are not limited to your own DNA as you are researching.  As we work on our traditional genealogy, we may find famous ancestors, a Mayflower passenger here or a President there.  If you are descended from them then you can bet that hundreds of other people are also.  Many times one of those hundreds has had their DNA tested to confirm their relationship to that famous ancestor.  You can use that published data to add to your family history. 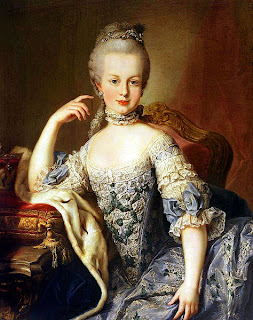 Let’s look at Marie Antoinette, while she has no living descendants, she makes a great example.  Tests from a lock of her hair and from her son’s preserved heart show her mitochondrial DNA to be haplogroup H, the most common group in Europe.

Marie Antoinette’s maternal line has been documented back 25 generations to the 1100s.  You could still be related to her through this Germanic line of women.  There are twelve exact HVR1/HVR2 matches for Marie Antoinette on Mitosearch.org.  Even with an exact match, that common ancestor lived over 625 years ago, in the 1300s or earlier.

On paper, Marie Antoinette’s ancestry goes back to the 1100s in the Holy Roman Empire (modern day Germany).  DNA can take us further.  One theory shows a correlation between HVR2 marker 152C and the Goth barbarian tribes.  The Goths were in no way a homogenous genetic group as they grew through mergers and acquisitions.  To say that one DNA marker defines a mixed group like the Goths may be hard to prove. 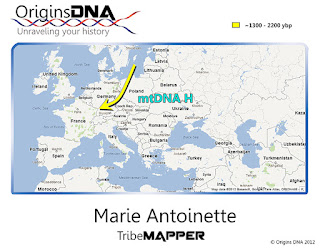 If we look at the geographic data associated with Marie Antoinette’s maternal tribe, a pattern starts to emerge.  Take all the DNA records available, matches and close matches.  With each close mismatch, we can step backwards in time in roughly 625-year increments.   TribeMapper® analysis shows a genetic flow of ancestors from Scandinavia down through the Germanic heartland.  The timing of this flow, from 2200 to 1300 years ago suggests a connection to the Goth migrations.  While this is still not definitive proof, it is an additional element that could be used to build a case that Marie Antoinette was a Goth descendant.

This is an example of the geographic data that can be harnessed from mitochondrial DNA.  The results with mtDNA tend to be more macro as there is less variability, which leads to less timeline resolution.  Y DNA has more variability and will produce maps in greater detail.  Our unique Tribal DNA will tell its own migration story and help tie us to history.