Those Places Thursday: Down to the Sea in Ships


Cousins in our midst.

We are all related.  Friends and acquaintances we have known for years turn out, with a little research, to be cousins.  Some cousins will never meet, but their connections come and go with the tides.

William Pierce Stubbs was born in 1842 in Bucksport, Maine. He was the son of a Shipmaster, and a Master Mariner himself from 1863-73. By 1871, he painted his first ship portrait, and by 1876 he was listed as a marine painter in the Boston city directory.

Stubbs produced a large body of work and worked throughout the Eastern seaboard, creating a number of ship paintings. His paintings are in the collections at the Mariner's Museum, the Mystic Seaport Museum, the Cape Ann Museum, the Peabody Essex Museum, and the Smithsonian Institution.

Orris Creamer Hathorn was born in 1849 in St. George, Maine.  He was a fourth generation Shipmaster and Master Mariner of five schooners and a brig from 1874 until just before his death in 1907.  He was Master of the Washington Freeman, the John Farnum, the Maggie Rivers and the James Elwell. 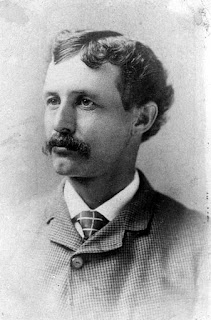 
Family lore states that Orris died from the effects of sulfur fumes carried in the cargo hold of his schooner.  His Maine Death Records lists cause of death as tuberculosis.  He left a wife and five children ages 13 to 28.

William Pierce Stubbs painted two portraits of the Jennie Lockwood between 1882 and 1894. 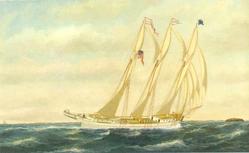 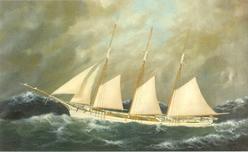 
Orris Creamer Hathorn was partial owner and Captain of the Jennie Lockwood from 1898 until 1906.

13 Feb 1906 - “During the severe storm last night a three-masted schooner, the Jennie Lockwood of Thomaston, ME., was driven ashore at Pea Island Life-Saving Station.”  “Captain Hawthorne and his crew of six men were rescued by the life-savers in the breeches bouy after great difficulty.  The schooner is reported high and dry on the beach, but is in fairly good condition.” 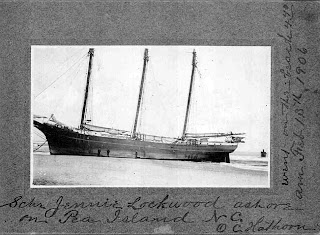 What also connects these two men is the fact that they are 4th cousins once removed.