The disputed origins of haplogroup R1b, most commonly thought of as Celtic, remains split between Iberia prior to the end of the last ice age and various West Asian locations after the ice age.  A new view on the R1b homeland comes out every year.  With all we know about DNA, shouldn’t we be coming to a consensus?  Typically, I refer to R1b as Celtic to help an audience make the connection between lettered haplogroups and culture or ethnicity.  I also add the caveat that Celtic is a misleading label.   R1b is supergroup of cultures including; Iberian, Gallic, Celtic, Germanic and Scandinavian.  To attribute empires or nationalities to R1b would be foolish, as R1b is tens of thousands of years older than any known empire.

Perhaps I’m naïve.  I like simple, logical answers.  The earliest publications on R1b described their ancestor R1, entering Europe from central Asia during a warm period about 30,000 – 40,000 years ago.  The last ice age forced R1 to split and take refuge south in Iberia and the Balkans.  Time and separation gave us the mutations R1b in Iberia and R1a in the Balkans.  That split is roughly what we see today in those regions.  That’s clean and simple.  The real world is much more complex.  R1b and R1a were not alone in Europe.  Their interactions with the other major European haplogroups- E, G, I, J and N has to be taken into consideration.  We can’t analyze R1b as if it were in a vacuum.

Let’s take y-DNA haplogroups out of the picture for a moment.  We know that modern humans survived and flourished in the Iberian refuge during the end of the last ice age, based on mitochondrial DNA studies.  [Could someone please run some y-DNA tests on those samples?]  The tribes in western Europe, whoever they were, had a 1,000 to 2,500 year head start over the tribes in central and eastern Europe on repopulating the continent.  The ice sheets melted and retreated earlier on the west coast than in the rest of Europe.  This gave the inhabitants of the Iberian refuge an advantage – a “first-mover” advantage gained by being the first to move north.  These first-movers gained a land-monopoly.  A tribe with a first-mover advantage and over a 1,000 year head start should have been hard to displace from western Europe.  In other anthropological situations, those original inhabitants are forced into niche locations by invading populations, but very rarely are displaced completely.  What we see on the west coast of Europe, is a very strong R1b presence and no niche haplogroups of a significant age.  From this point of view, either R1b is the original Iberian inhabitant or R1b completely decimated another earlier haplogroup that had a 1,000 year geographical head start.  I like simple.  R1b was in Iberia first.
Let’s throw some data at the problem.   The R1b haplogroup population is enormous.  The majority fall into SNPs R-P312 (Celto-Iberian) and R-U106 (Celto-Germanic).  There is so much information there that it tends to be noise.  If you want to get to the root of R1b (R-M343), you need to work with the branches that are closest to the root - R-L278*, R-V88, R-M73*, R-YSC0000072/PF6426 and R-L23.

I collected 250 records that matched these SNPs or were genetically close by STR haplotype.  These records were mapped based on user-reported most distant ancestor location. 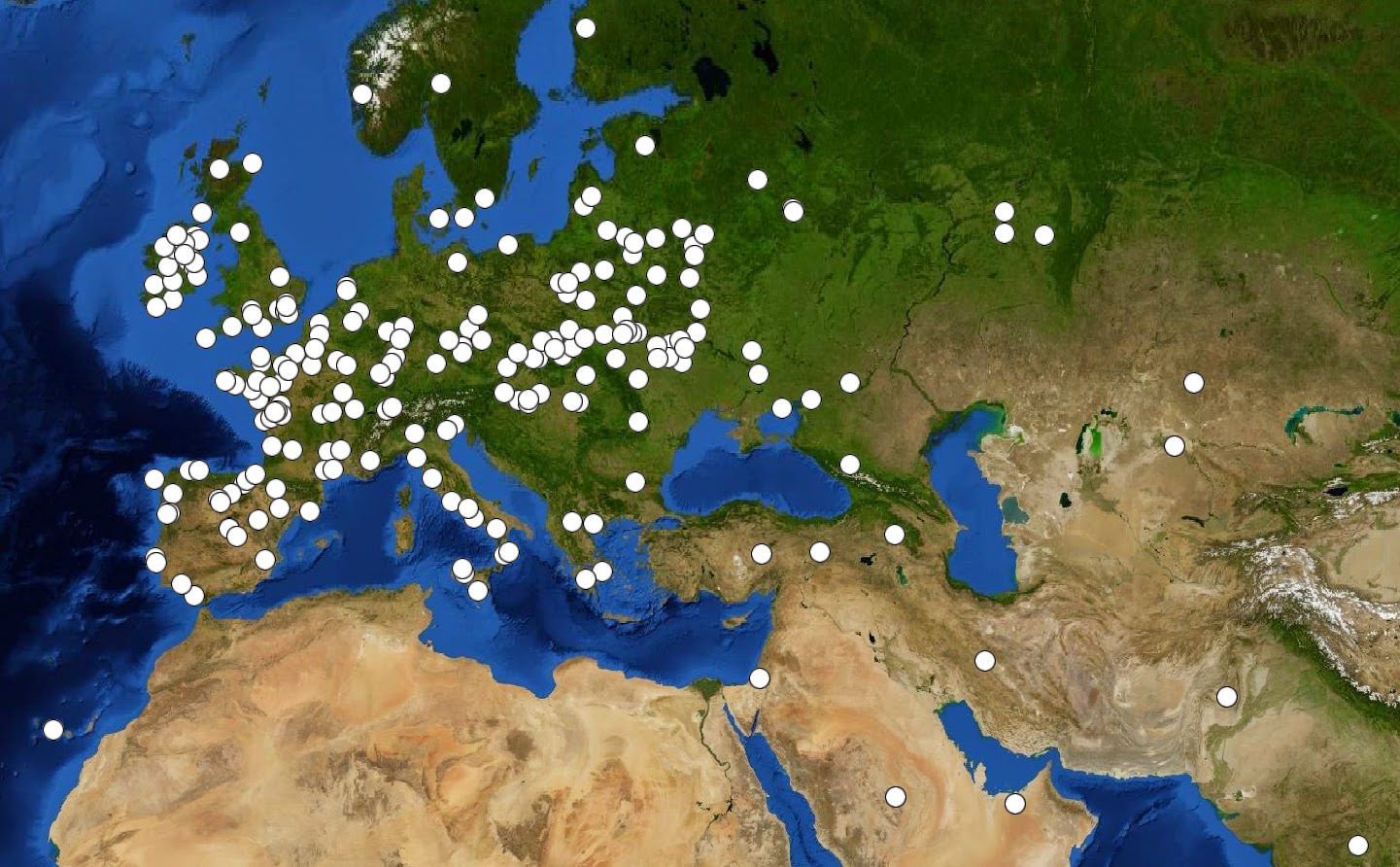 This is not a connect the dot exercise.  Just because two or more records appear geographically close doesn’t mean that they are genetically close.  These 250 records have to be treated like a network.  If this were Facebook, these folks would be randomly associated through family, business, school or neighbor connections.  These are y-DNA records.  There is a relationship between every pair.  Each pair has a different common ancestor, with a different number of generations to get back to that ancestor.  Here is an example of what that relationship looks like across multiple pairs.  The number represents years back to a common ancestor (TMRCA). 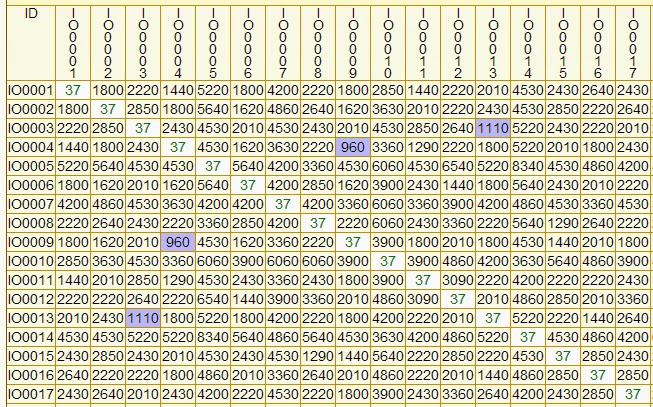 When all of the interrelations are taken into consideration, the group of records can be displayed as a relationship tree of who is older or younger and who is more closely related to whom (phylogenetic tree). 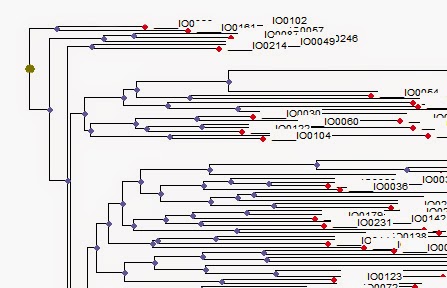 Now we have who, where, when and how the records are connected.  At this point it does become a connect the dots exercise.  I’ve used a biogeographical analysis to connect very specific sets of dots based on the calculated interrelation of the entire group. 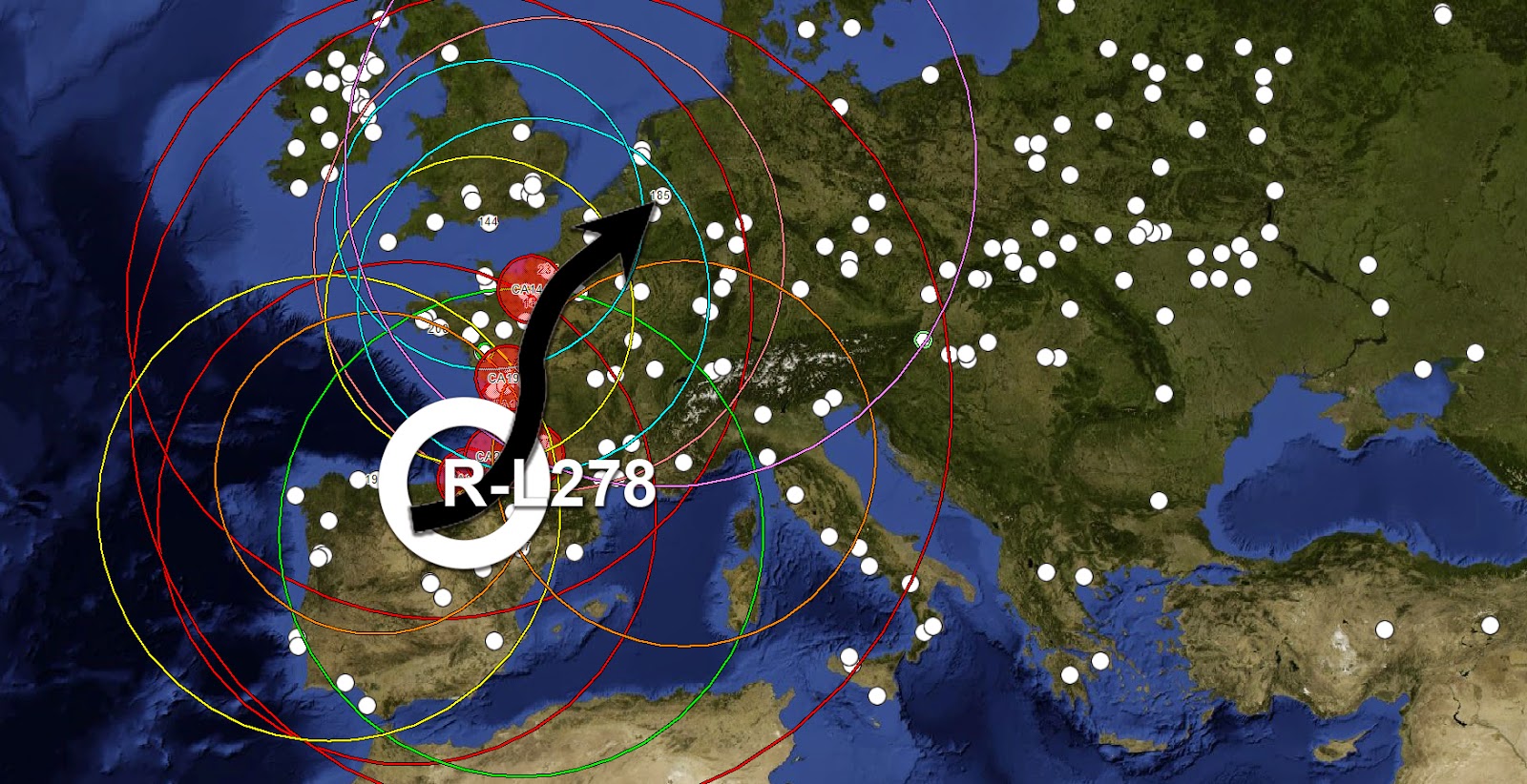 The R1b genetic family tree has a trunk and many branches.   The trunk of the R1b data is firmly rooted in Iberia.  The main core of the tree stretches along the western Atlantic coast of Europe and branches across Europe and even back into Asia.  The results that I found support the work of the earliest pioneers in the field and conflict with the latest publications. 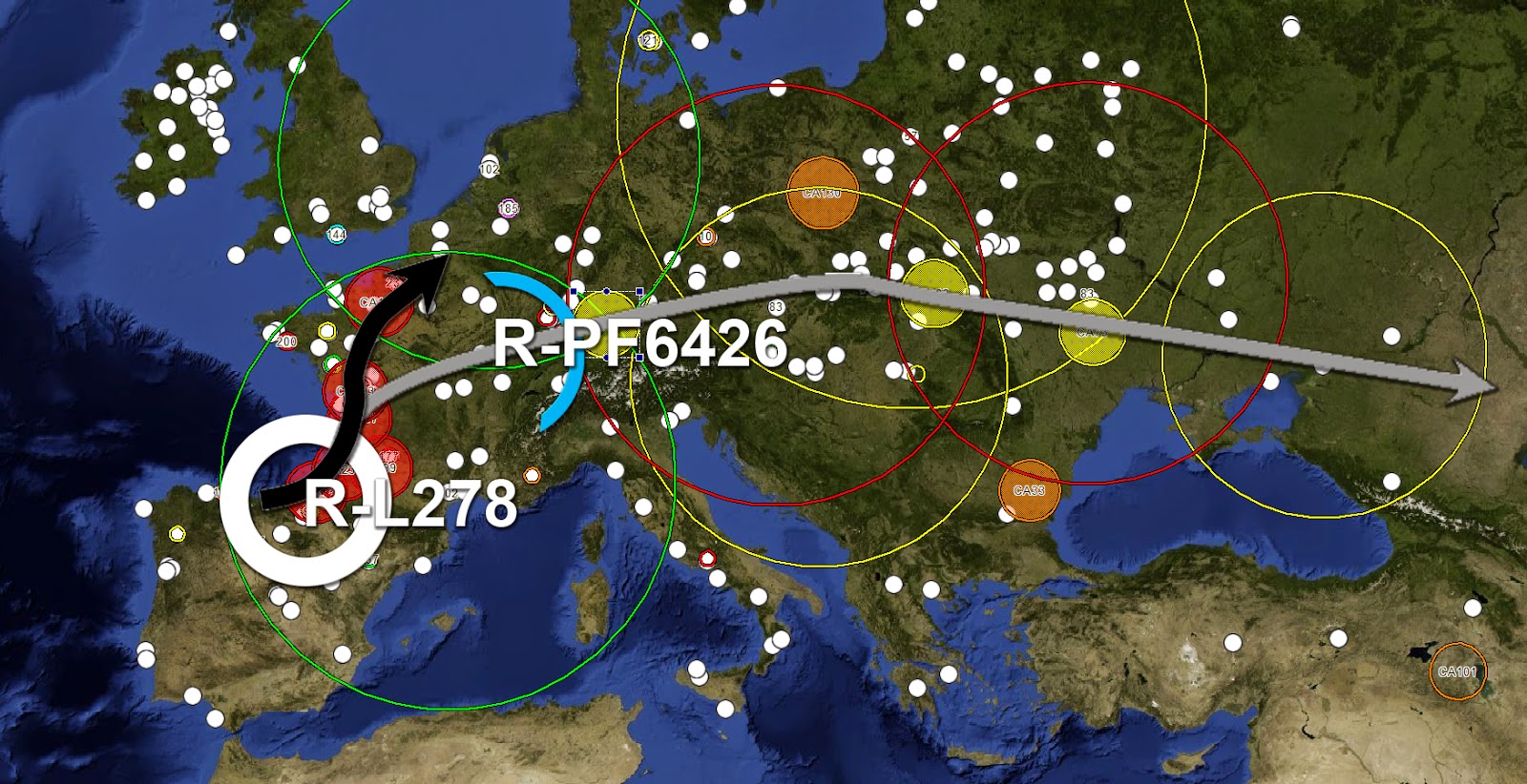 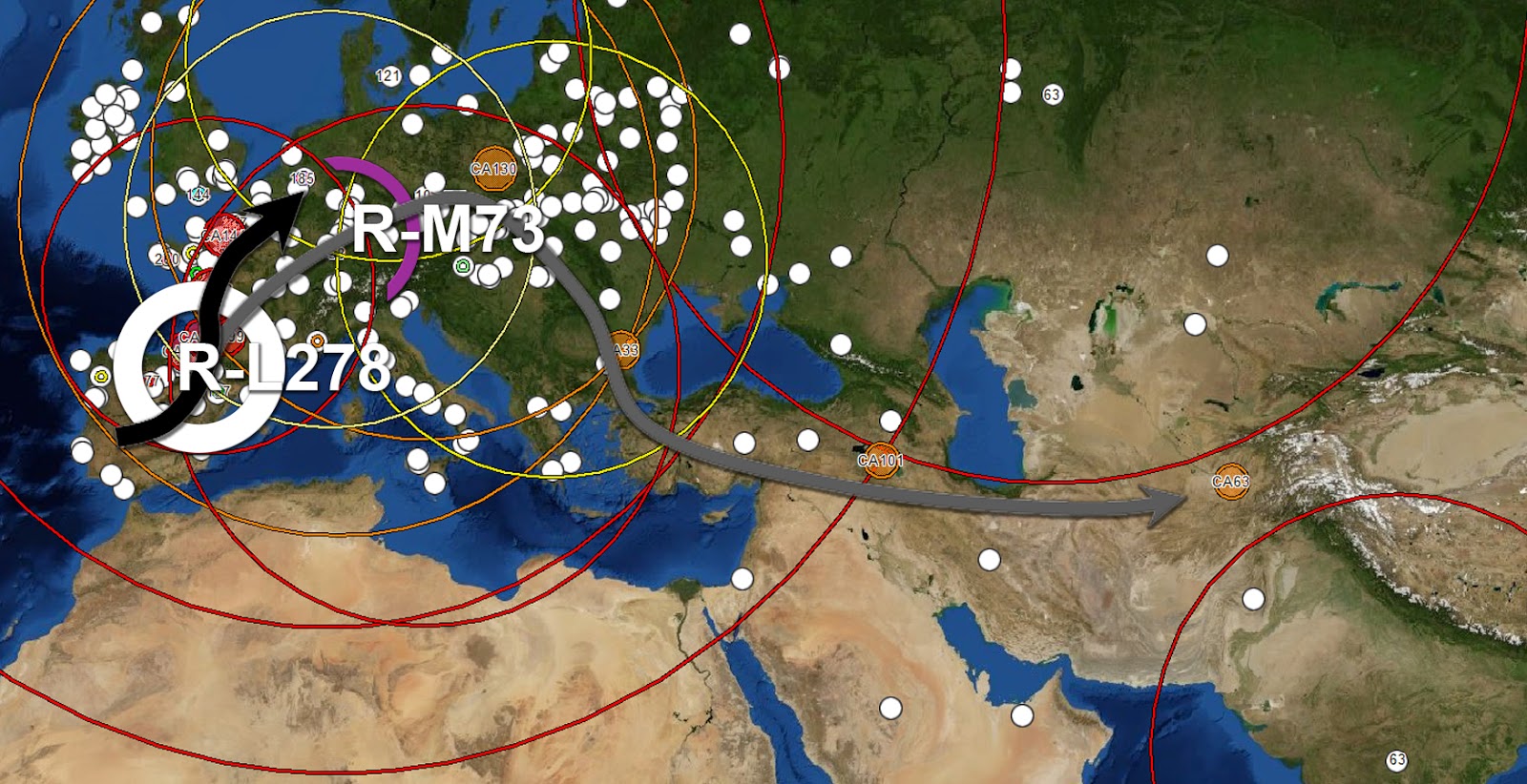 Every analysis has its limitations.  The work that I’ve done looks back at the R1b family about 8,000 years.  The scarcity of data only allowed for me to predict the origin of R-L278, which is currently one branch below the main root of R-M343.    I can’t tell where R1b was between the times that R1 split into R1b and R1a, yet.

In my analysis, I have included R-V88.  They are a curious group of R1b found in Africa and the Middle East.  I will be treating R-V88 in a separate write-up to do justice to a very interesting back migration story.  The R-V88 article can be found here.