Recently at a conference, I was talking to some folks about DNA and the migration of tribes based on haplotypes.   A question came up, "What about the Huns?"  I had to answer that I had never looked into the Huns. That night I started looking for evidence that the Huns left a genetic footprint.

I usually take the DNA of an individual and work backwards to find their origins.  In this case, I started with the origins and tracked forward in time.  The Huns were a nomadic tribe of people that arrived from eastern Asia around 150 AD.  They built a European empire that lasted until 469 AD.  The height of the empire was under the reign of Attila.

The Huns were not a homogeneous group.  They integrated those that they conquered.  The Alani and the Ostrogoths were a few of the assimilated groups.  Their DNA would have been eastern European, perhaps R1a, G2a, I1 or I2 and a minority proportion, but the core and the majority of the Huns, based on historical reference, would have been East Asian.

By the end of the Hunnic Empire, the Huns had spent over 300 years, 12 generations, in Europe.  Unlike the later Mongol invaders, the Huns had no Asian home to return to.  They, in turn, were assimilated into the cultures they once ruled and left descendants across Europe.

Most likely the Huns were from eastern Asian origins.  That limited them to haplogroups C – ‘Mongol’, D – ‘Tibetan’, N – ‘Han/Finn’, O – ‘Manchurian’ and Q – ‘Altaic’.  The ethnic descriptions that I’m using are overly simplistic, just enough to give you a feel for the possible cultures present.   I surveyed DNA record sources for Russia and Europe, looking specifically for these haplogroups.  Groups D and O were isolated individuals, easily attributed to Silk Road travelers who settled in Europe.  Group C was predominantly C3 and related to the later Mongol invasion.  N was either heavily Finnic or a few isolated Siberian individuals.  Q was a different story completely. 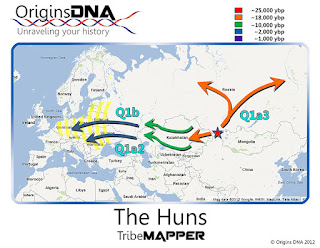 Haplogroup Q has origins in Siberia, most likely north of the Altai Mountains.  Q is also the origin of the Native Americans.  The majority of the Native America haplogroup is Q1a3a.  What I found was a significant Q1b and Q1a2 population in Eastern Europe.  When I map the Q1b genetic footprint using TribeMapper they fall exactly north of the Danube River and east of the Rhine.  This corresponds to the territory of the Hunnic Empire.  The Q1a2 group maps to Hungary, the royal seat of the empire.

These Q1b and Q1a2 are close-knit tribes each with common ancestry within the last 2100 years.  The timing of their common ancestry and their geographic footprint make a strong argument that these two Q groups were the genetic core of the Hun invaders.

A few caveats.  Not every European in haplogroup Q is a Hun.  There is a population of Q1a3a, a closer relation to Native Americans, living in Sweden that doesn't correlate.  Not every Hun is a Q, there are bound to be some other groups mixed in like the isolated N individuals as well as the folks the Huns picked up along the way.

When we think of the Huns, probably the first person who comes to mind is Attila.  Attila was the second to last ruler of the Huns at the height of the empire.  He died in 453 and the empire crumbled in 469 AD.  There is no evidence to say that Attila fits into either the Q1b or Q1a2 group.  If I had to pose a theory, I would say that Attila is Q1a2, part of the royal class of Huns living in Hungary.

The Huns (Q1a2 & Q1b) and the Native Americans (Q1a3a) share a common Asian ancestor around 18,000 years ago, most likely from the Altai Mountain region.  Not all of the ancestral Q1a3a traveled to the new world.  Some remained in the old world and are found across Siberia and into Scandinavia.  If you live in the Americas and you have been tested as a Q, don’t automatically assume that you are Native American.  Get a deep clade SNP test for confirmation.

The combined evidence of DNA, geography and history leads to the conclusion that at the end of the Hunnic Empire, the core East Asian Huns assimilated into the eastern European cultures.  They left behind a strong genetic footprint in the same territory that they historically inhabited.  The next time I’m asked, “What about the Huns?”  I can point to Europe and say, “They’re still there.”